Sometimes things happen and days turn into weeks around here. Have you noticed?

While I had the best of intentions to post birthday and Valentine's photos last week, a bad tummy bug hit a couple of us here. It's odd for me to get sick and then even though I was technically 'down' and had so much time on my hands, I still wasn't feeling well enough to even pick up a book to read.
So there goes any productivity, even on the sickbed. Sad and unfortunate.

Finally bouncing back and praying to the good Lord that the last three remain unscathed, I'll quickly try to attempt a wrap up via photos and we'll call February finished even if the calendar says it's not quite.

The big kids each made Valentines boxes for the exchange with the other kids. Each of them created their own themed box and used their unique creativity (and the help of Pinterest).


Lily went with the Frozen theme and did Elsa's castle in box form. Surprisingly, no other kids went with Frozen so hers was unique. 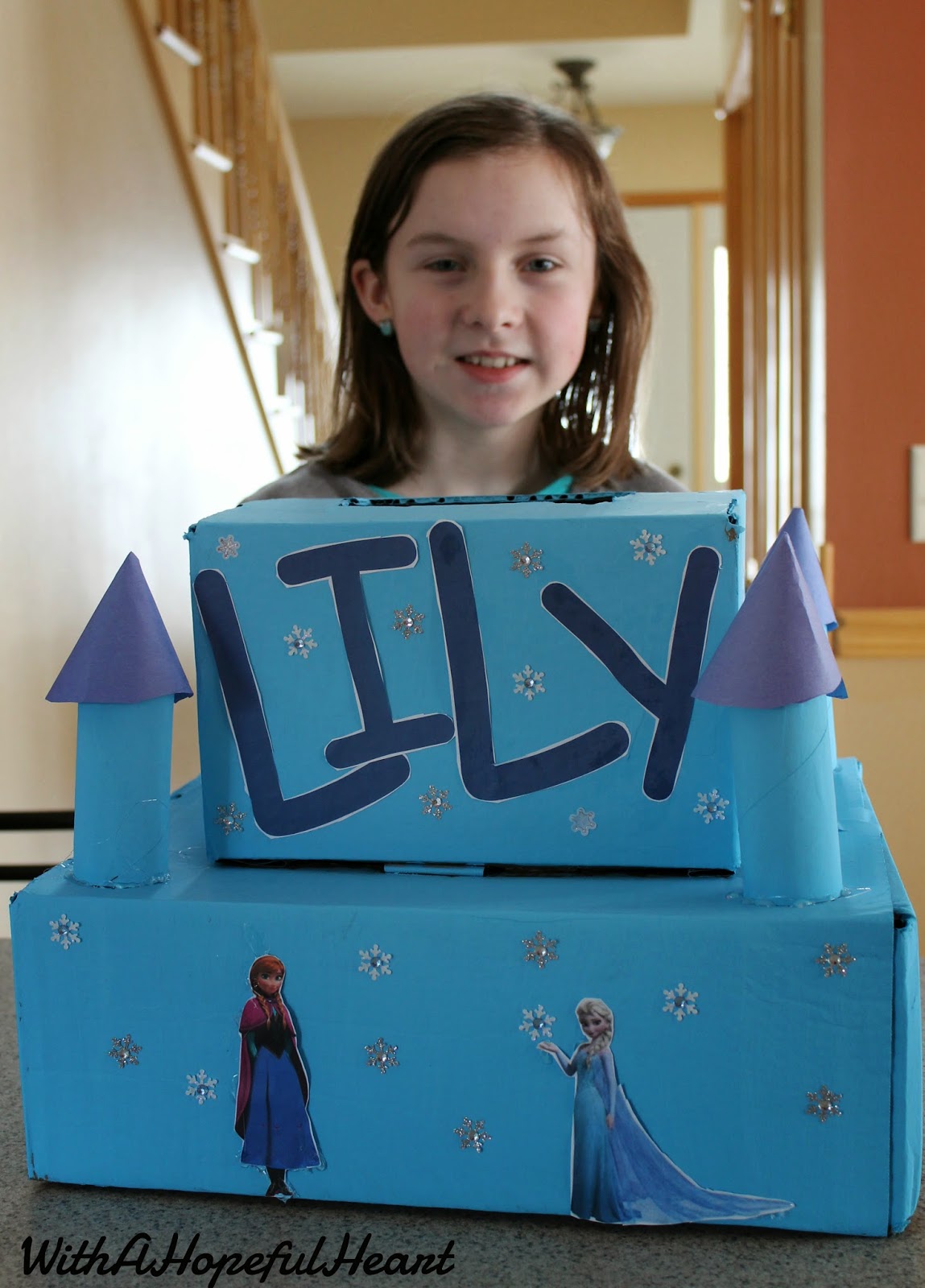 Jonah is my super-creative, sometimes over the top, but has trouble putting his B-I-G ideas into action, child. He wanted to go with the Lego movie theme and created the Double Decker Valentines box. (click the photo to see the speech bubbles)

Another project knocked out of the park and completed on time.
Again, another unique box among the others. 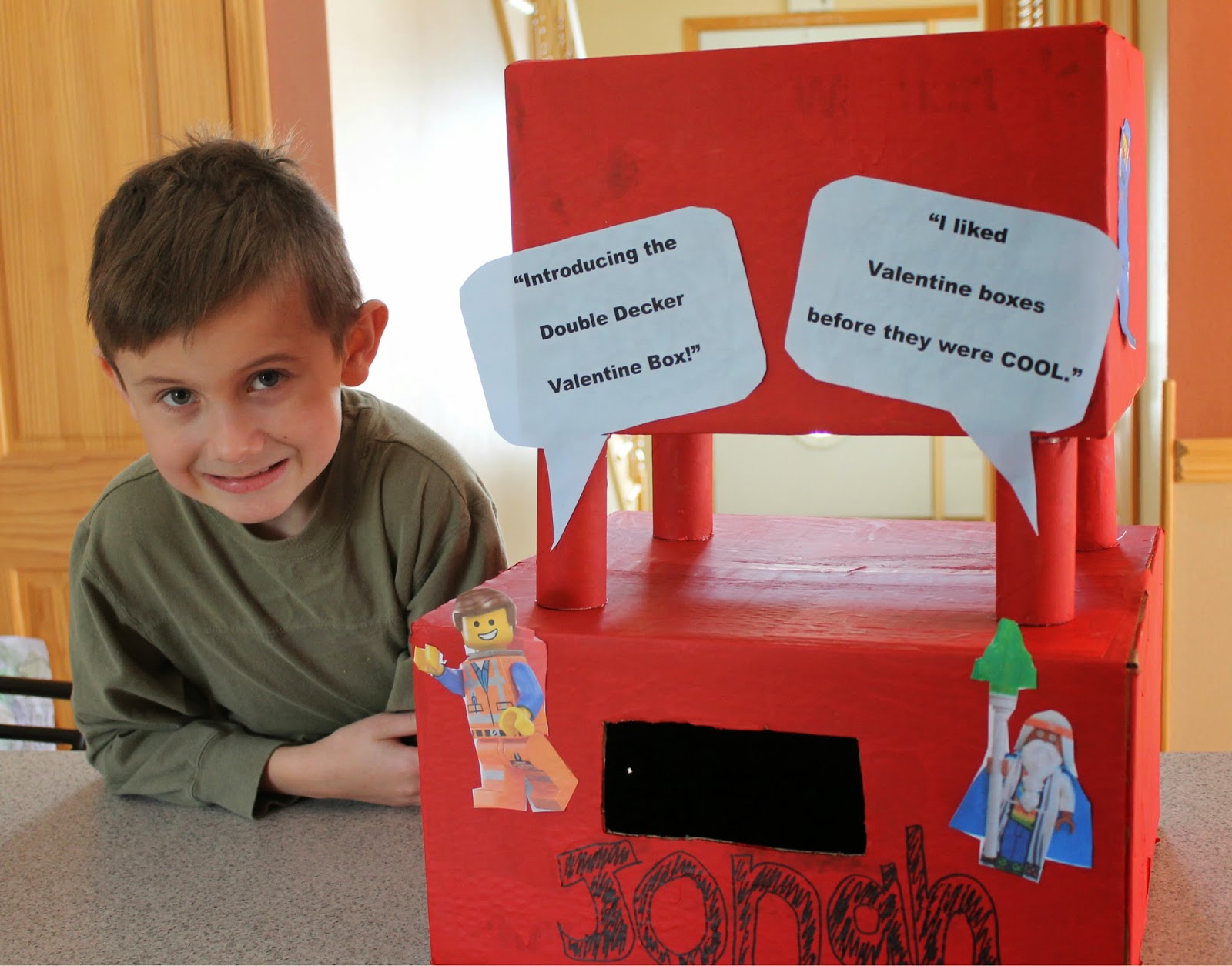 The following day was Valentine's Day and our parish's annual Winter Carnival, an all afternoon and evening affair. The worst part was that the temperature was frigid cold and the actual lack of snow put a damper on some of the outdoor activities.

There were indoor and outdoor games for the kids along with horse drawn wagon rides through town as well. The little kids especially enjoy the indoor games with prizes and the creation station activities.

The kids warmed up by the bonfire outside during the scavenger hunt Reed put together. 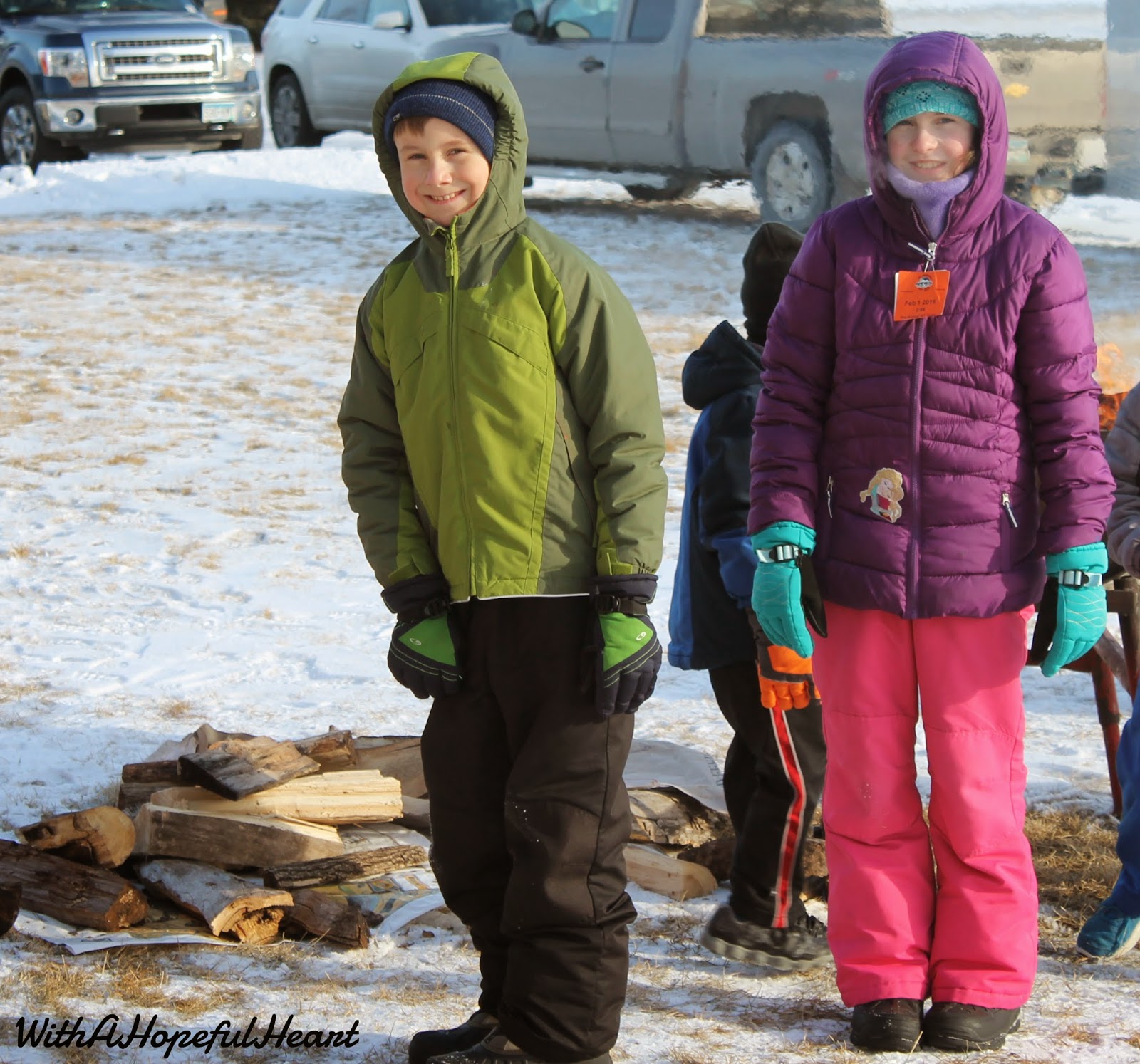 In the evening, our Bishop joined us for Mass and chili supper. A tradition our priest, Fr. M started last year was an evening movie with the kids. This year it was Big Hero 6. The kids think it's a pretty big deal to watch the movie with the priest and at church. 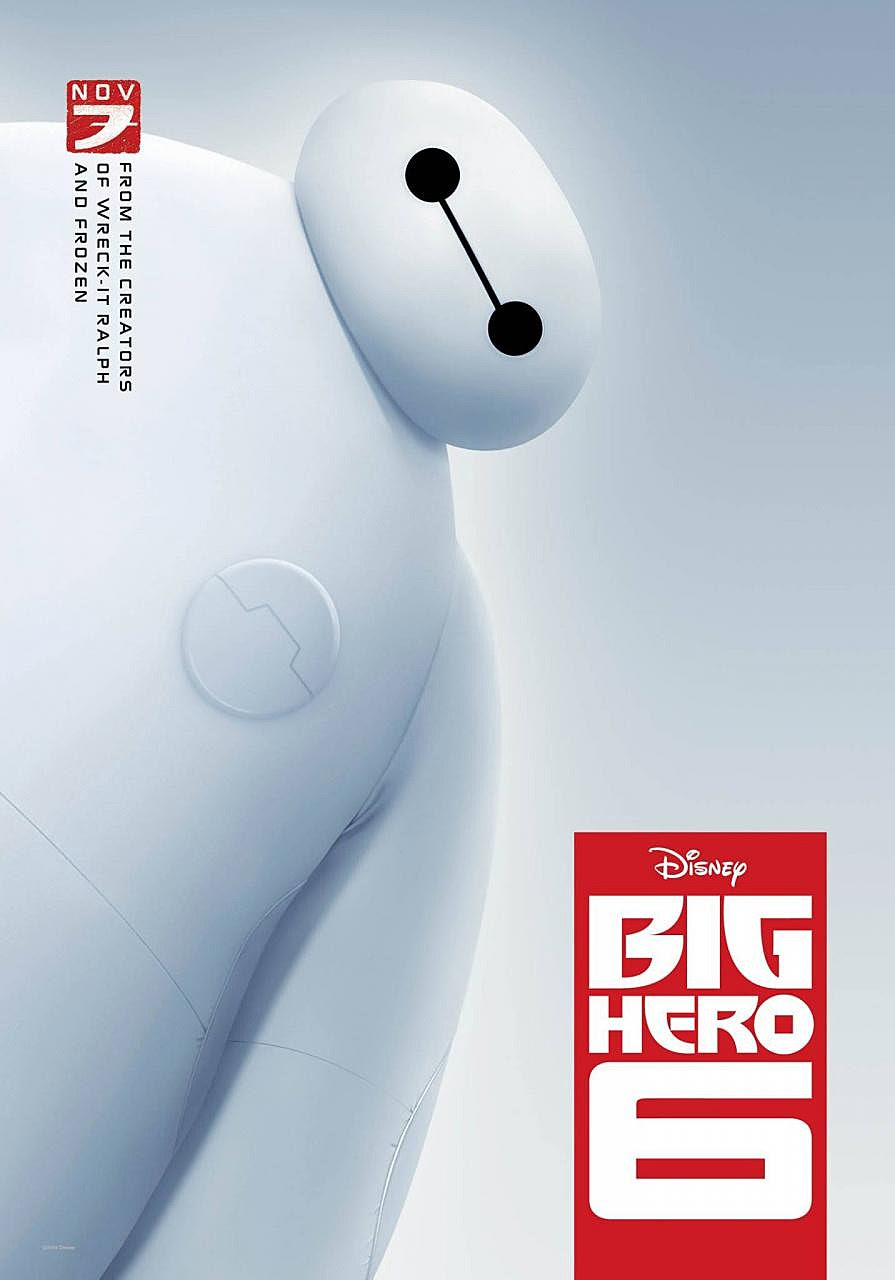 Before Mass, we've also started the tradition of doing a pinata.
You may remember Olaf from last year when we watched the Frozen movie?

This year one of the moms who helps plan the event made the cat from Big Hero 6, Mochi. It was pretty awesome and must have taken a lot of time.

As with last year. another huge hit and another successful winter carnival. 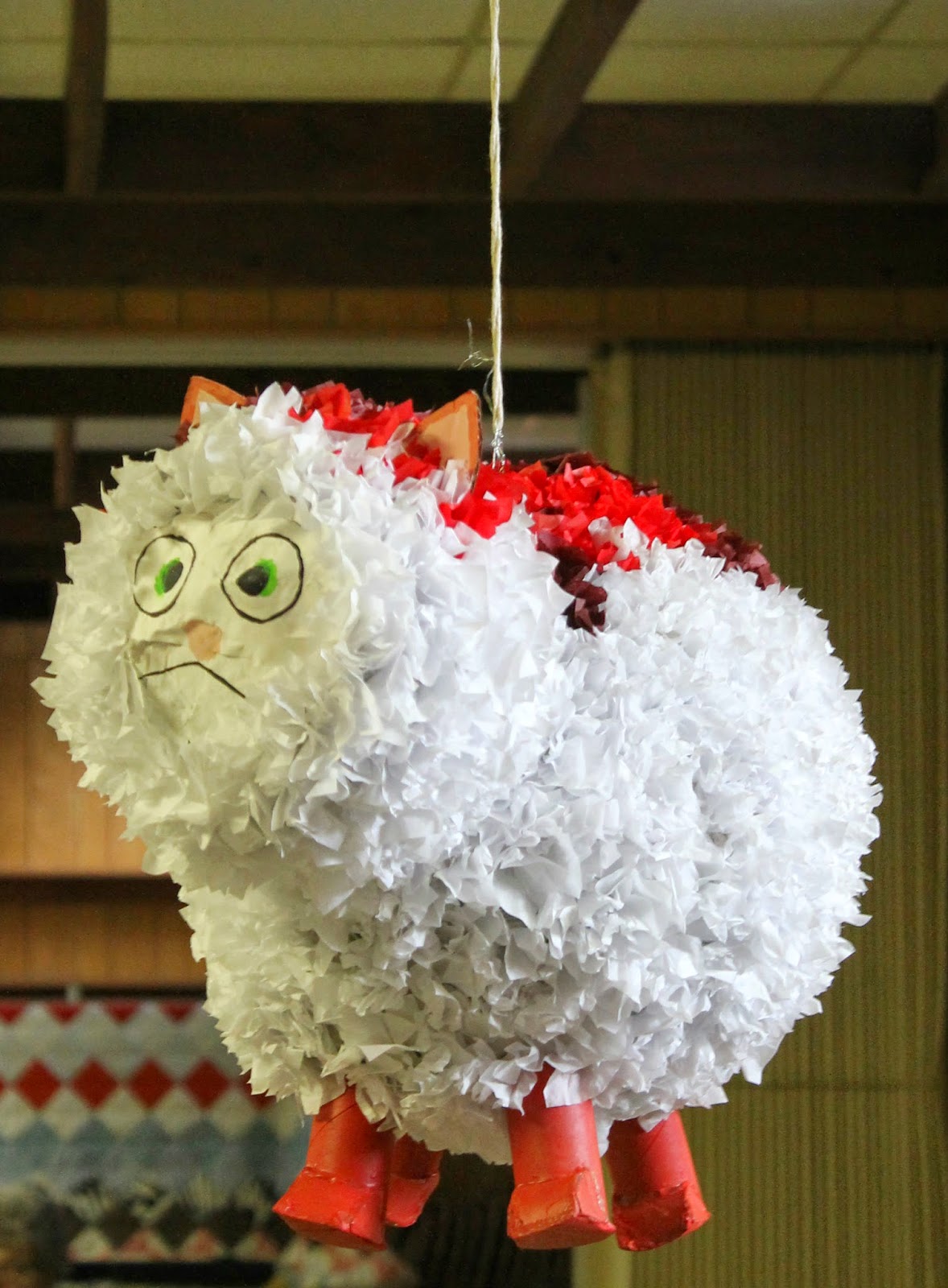 The following two days were when Margaret got sick and I followed. Feeling like we'd both bounced back, Tuesday was Gianna's 4th birthday. No birthday post for my sweet girl because I hadn't had time to prepare it, but we did a little bit of celebrating. Since we'd already celebrated the two girls together, her birthday was simplified and my parents spent the day with us.

I was still on the mend and hadn't any idea the next couple days that followed I'd relapse with the ickies. Please pardon the less than stellar family photo, but I guess they can't all be perfect.

Now you know how we roll around here. 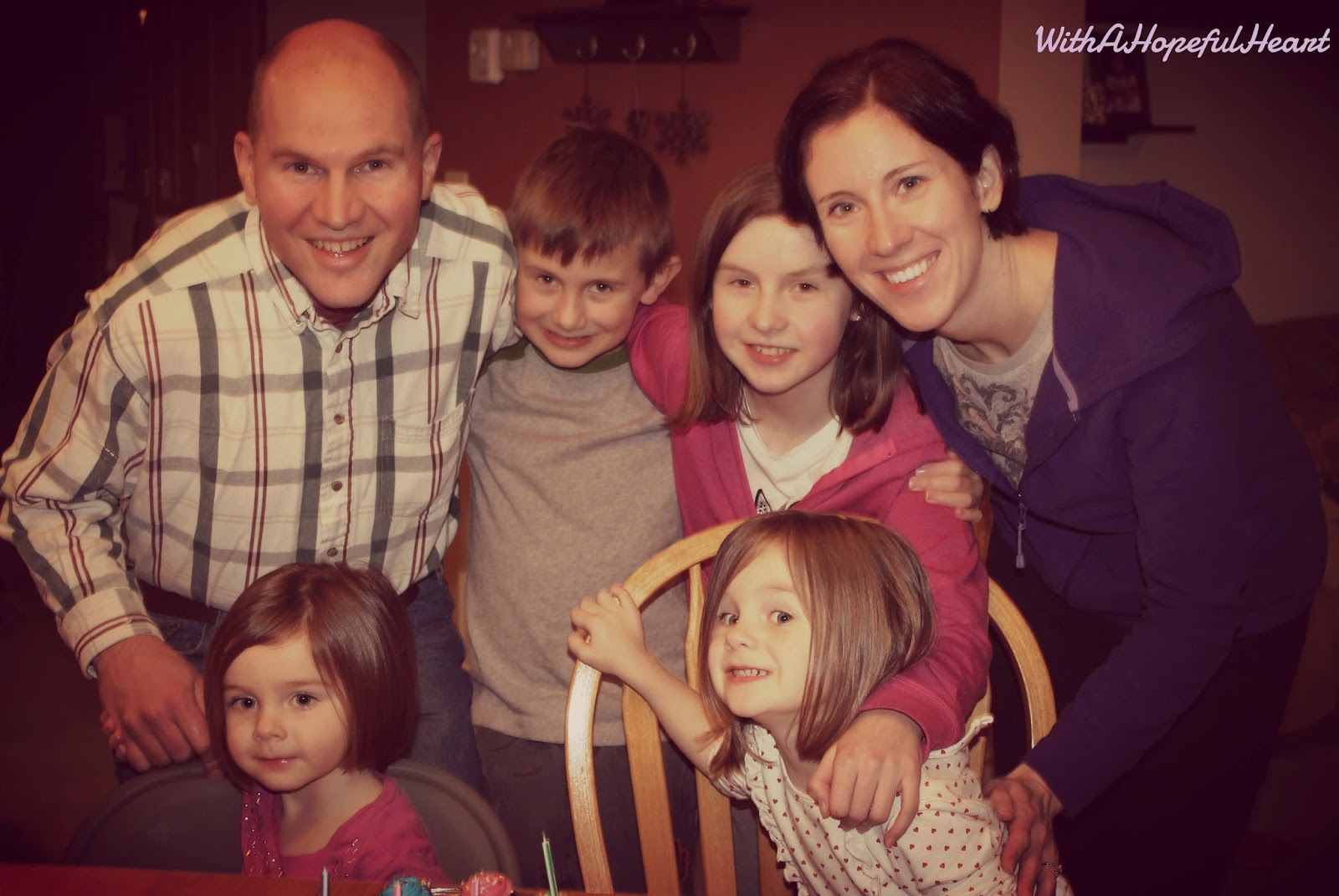 With that, we survived the next few days and I had one more down for Thursday.

How's your Lent going so far? Let's just say mine has started off with knocking me down and running me through the wringer. I joked with someone when I said I thought Ash Wednesday was perhaps my last. That evening I was pretty sure that the next 39 days of Lent were gonna be smooth after that ride.

We had one or two days with temps in upper teens and then the cold blast is going to be here again.
I guess we're getting the cold January weather in February instead. Crazy winter!

We took advantage of the sunshine and bundled up to at least get some fresh air.
After last week being cooped up, I needed it.

The girls didn't want to come inside and instead looked at me through the door as I warmed up indoors. 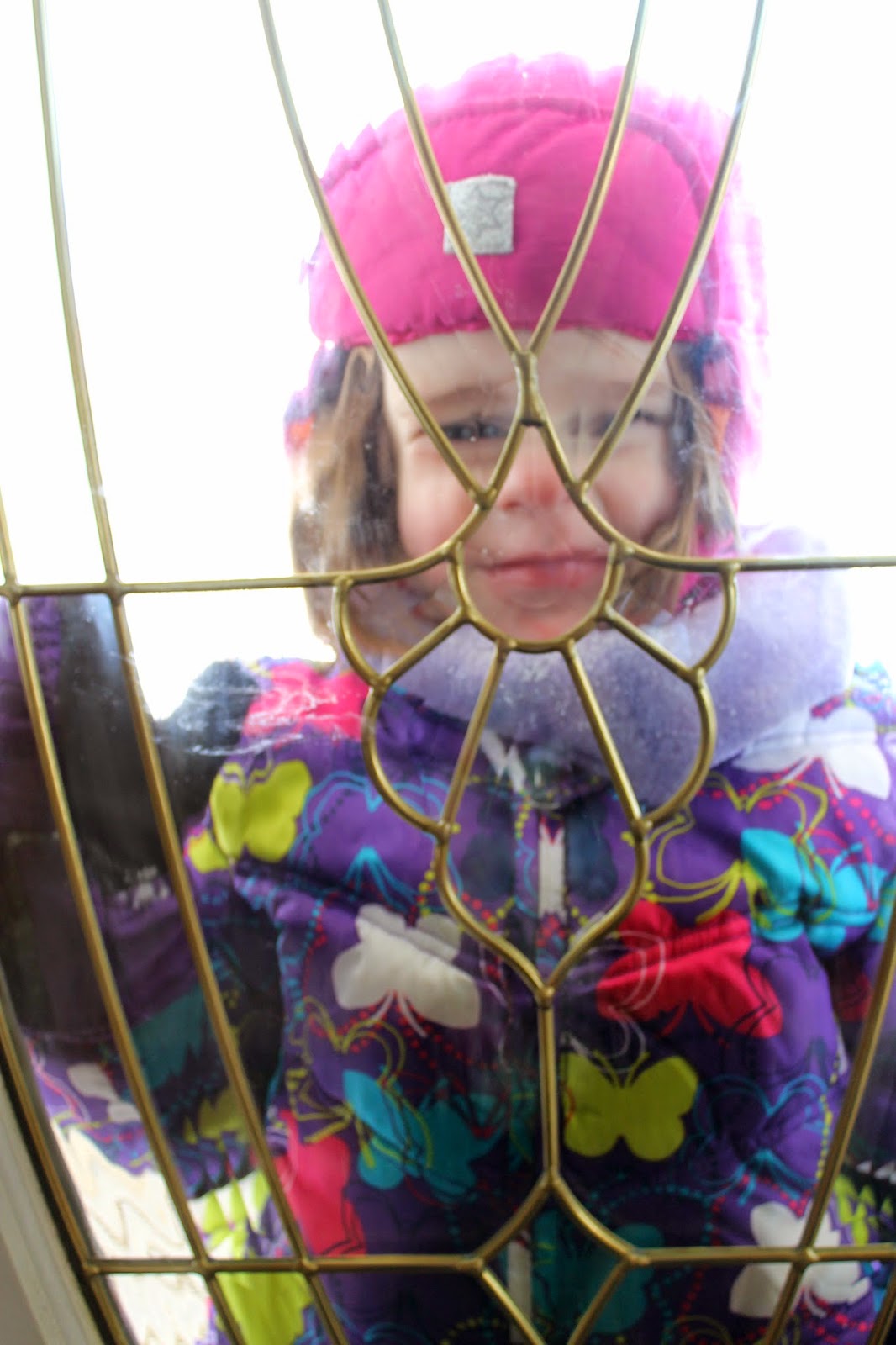 Poor girls, they just want to be outdoors running around like hooligans and riding trikes and bikes again. 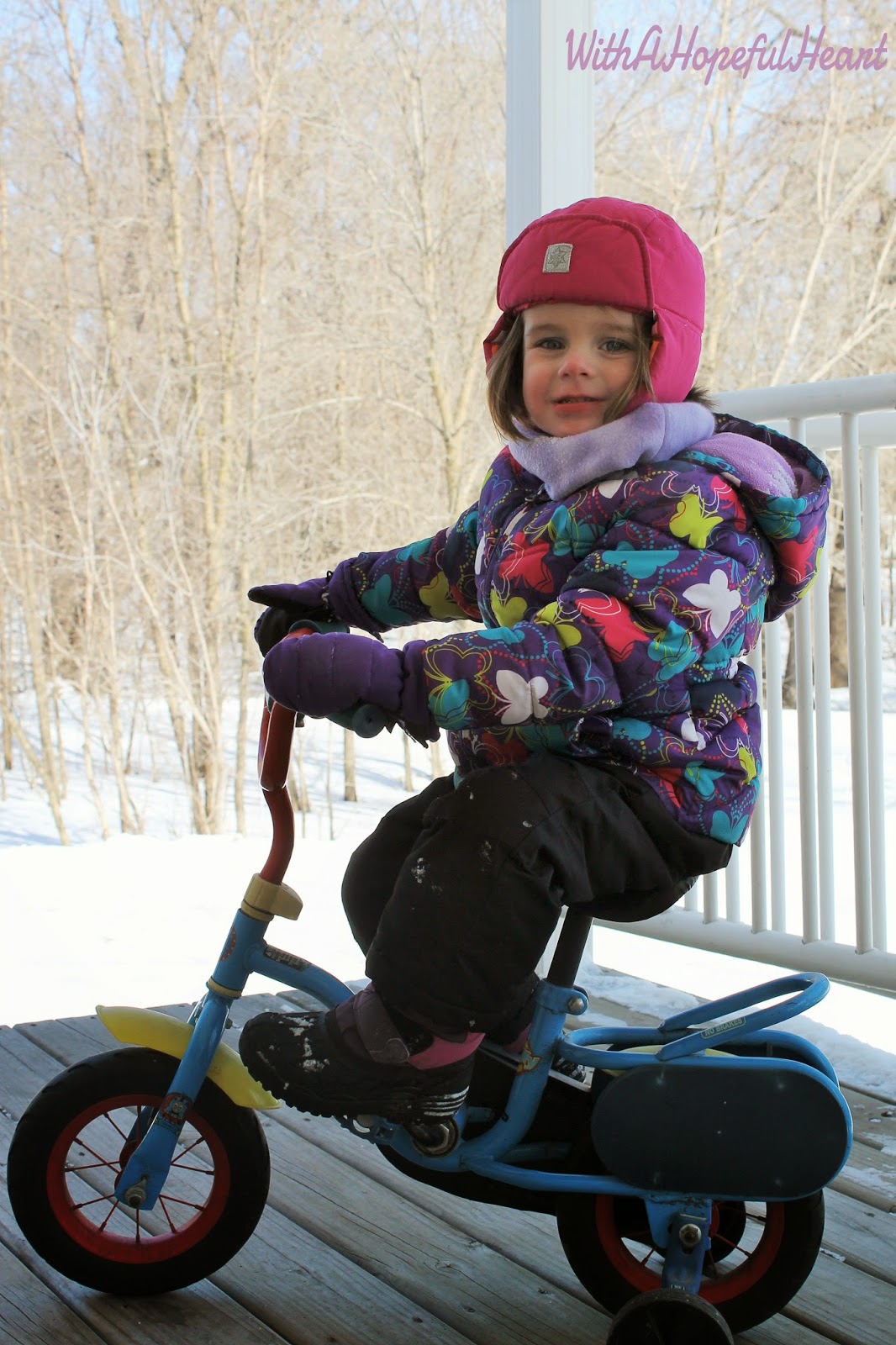 Here's to March around the corner and warmer days at my window.

It's that time of year again when we are just about ready to scream, put up the white surrender flag and give in to the winter blahs. The calendar tells us it's February and if you're a homeschool mom you know exactly how many days of school are left (ahem, that would be 74 for us). 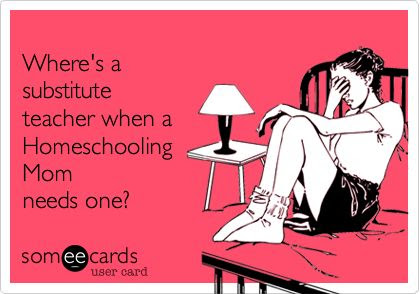 Thankfully, this winter has been bearable. Besides that, God knew what He was doing when he blessed and surprised us with two sweethearts born this month. Just the idea of having two birthdays to celebrate, however low key and simplified we do them, they are still celebrations to look forward to. They are two very wonderful reasons to get my act together, stay on task with birthday planning/gift buying, and the days swirl by at rapid speed.


Last week we celebrated birthday #1 and enjoyed pink velvet cupcakes with buttercream frosting, decorated with candy Olafs and snowflakes (thank you, clearance aisle). They were a hit! 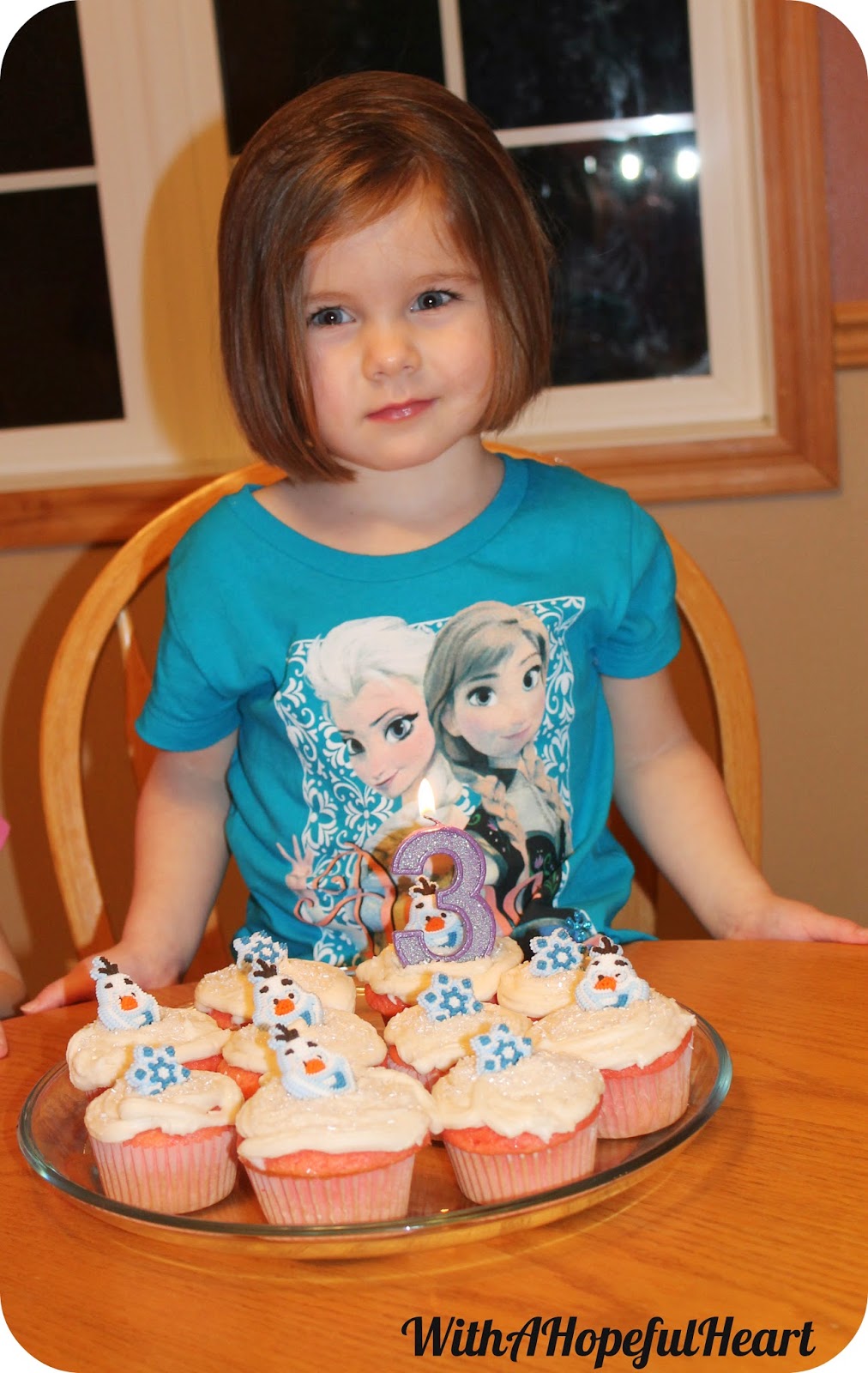 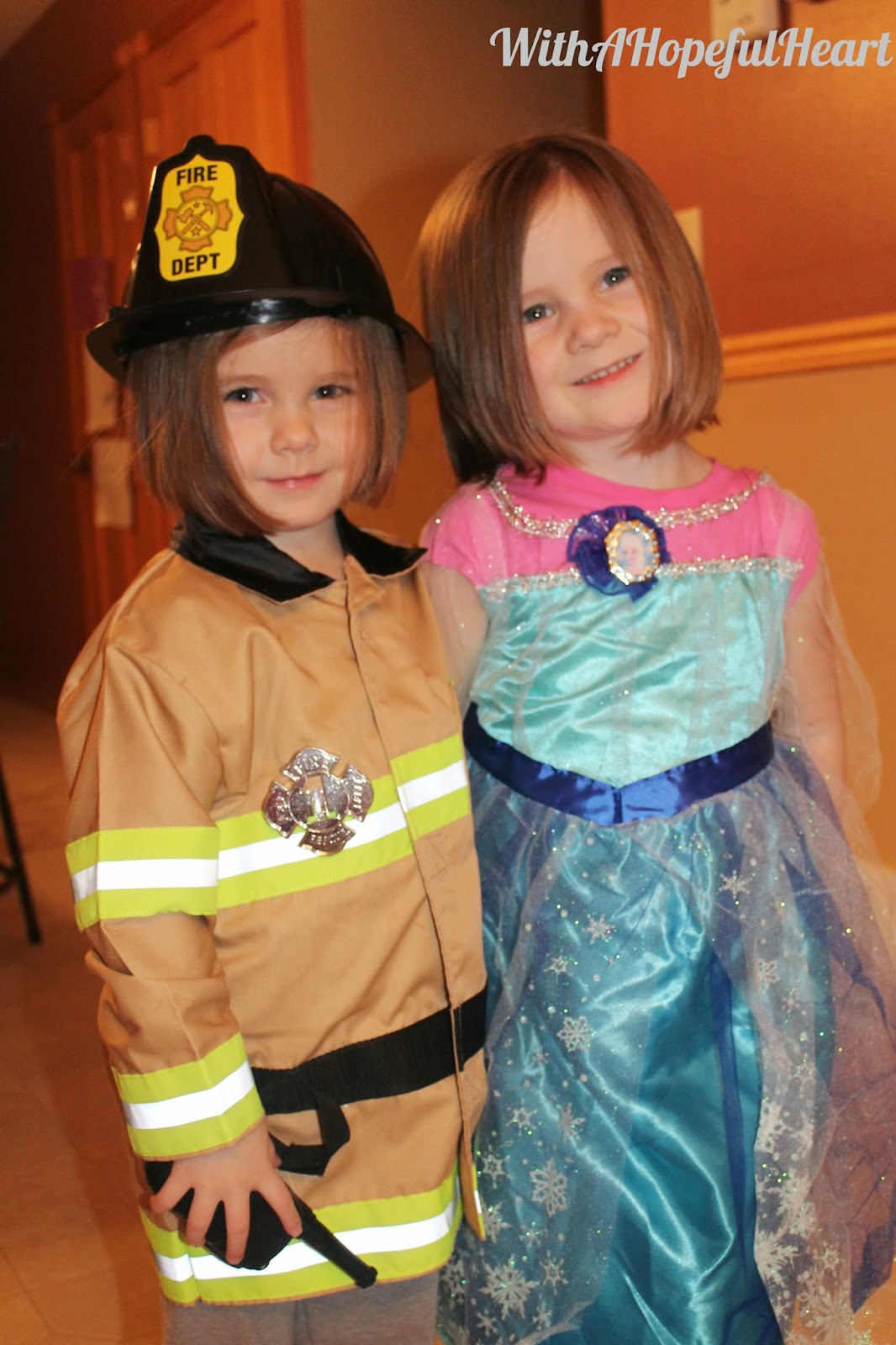 She was one happy three year old, content with yummy cupcakes and gifts on her birthday day.

This past weekend fell smack dab between the girls' birthdays and we celebrated their birthdays with a few family members.

You better bet there was a Frozen cake!

I went with store bought and had them keep it decorated minimally with just snowflakes/sprinkles. I had found a set of Frozen character toys online that I thought would serve well as cake toppers and toys afterward.  Always thinking I am.

They worked and the girls were happy to find out that they could play with them later. 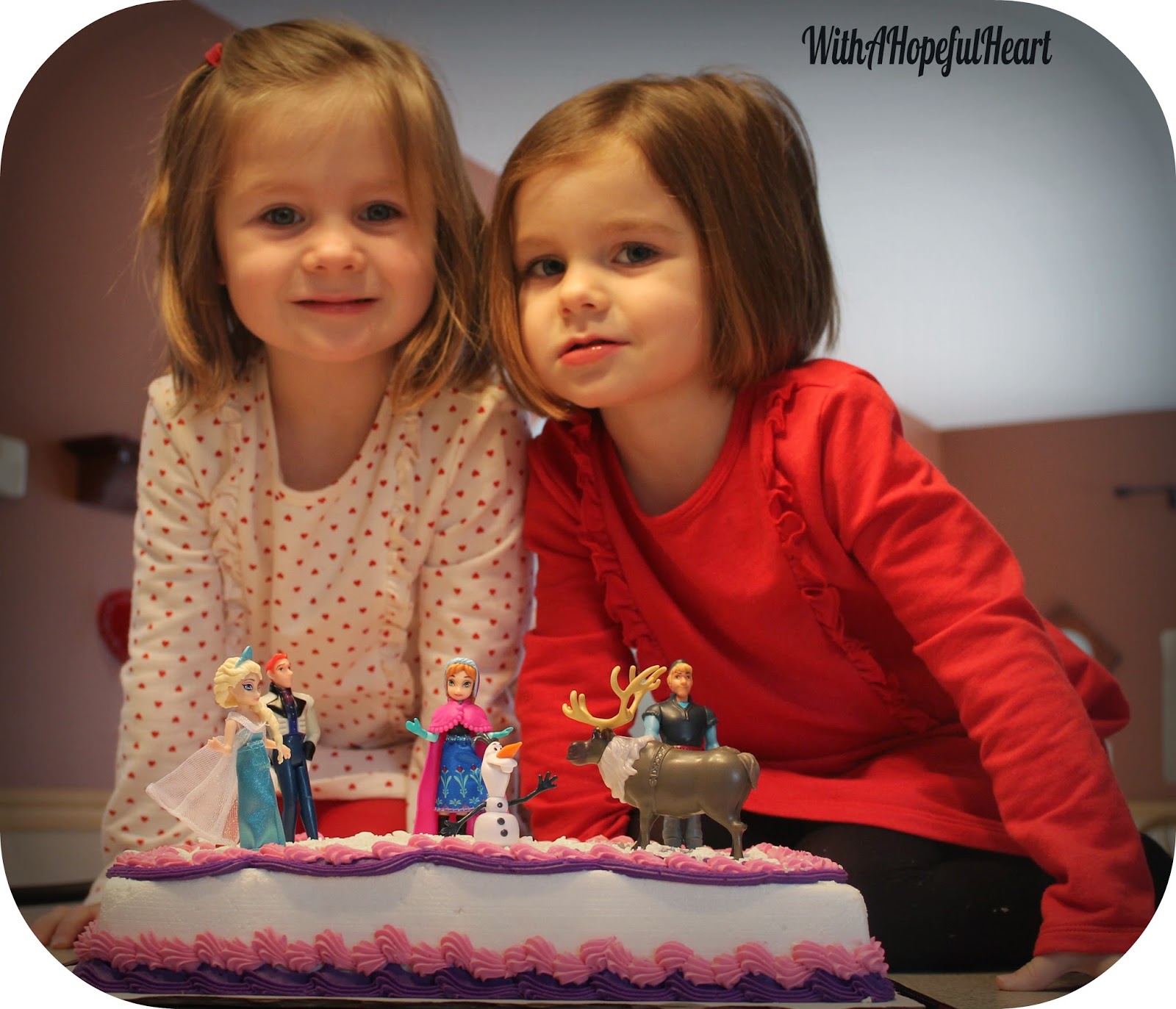 Don't even ask why they are on the counter posing with the cake. They insisted on it.
Odd angle much?

These crazy girls, my Irish twins. They certainly are hard to capture lately with smiles and looking at mom with the camera. 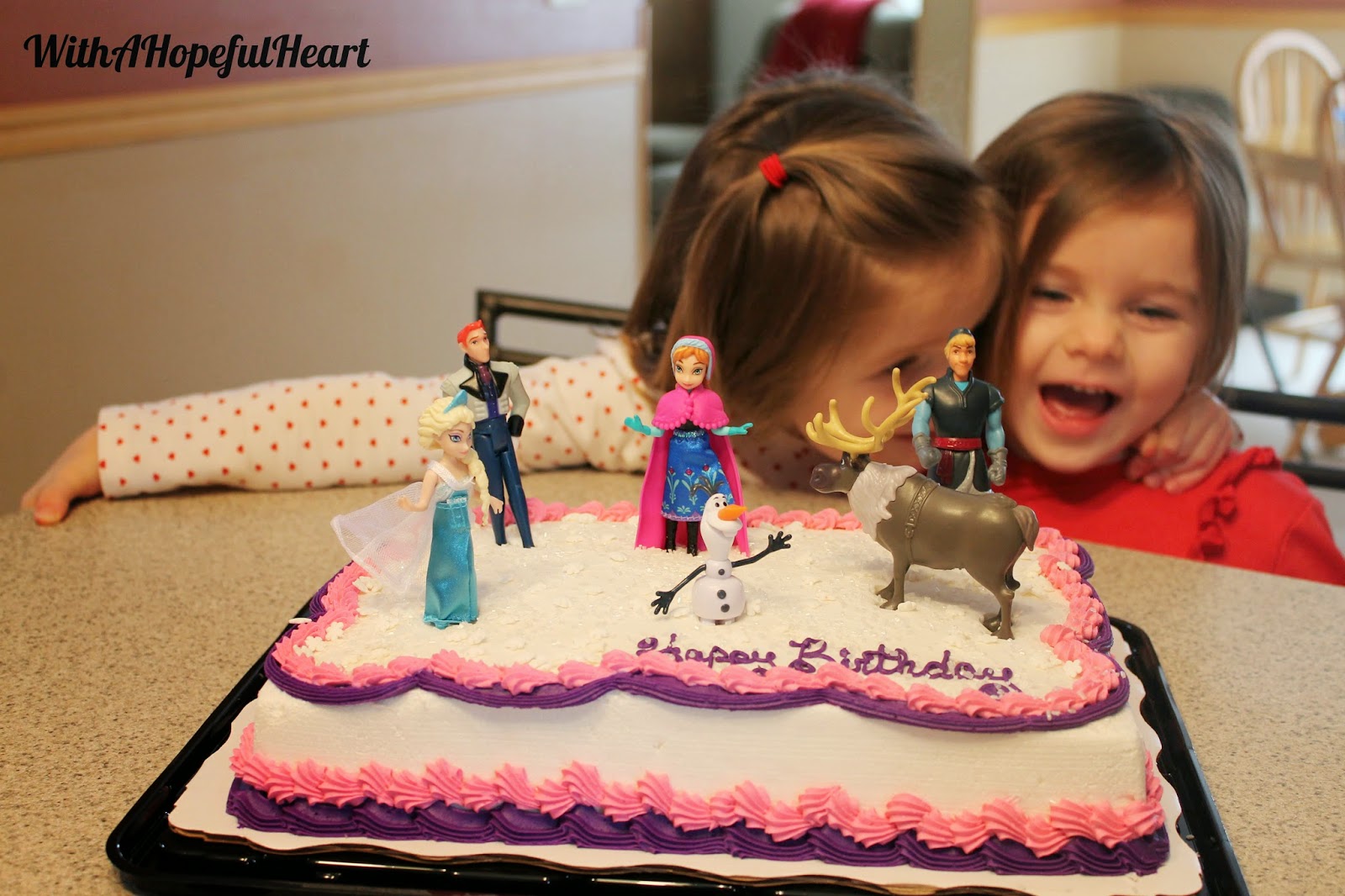 You know us, we'll celebrate at least one more time next week on Gianna's birthday day too.
It falls on Mardi Gras this year, so there's sure to be more cupcakes and other treats to consume before Ash Wednesday.

In the meantime, this week is all about planning for Friday and Saturday.  Besides setting up/decorating and some cooking for our parish Winter Carnival, we're heading to our homeschool group Valentine's Day sledding party get together on Friday.

Speaking of, are you looking for printable Frozen Valentines? There are cute FREE ones over here.

How about Minecraft Valentines? 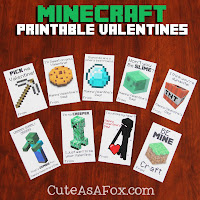 Scroll down to find them over here.

Saturday you'll find us at our church stirring the chili, snacking on munchies, playing games, hitting the pinata, having Mass with the Bishop, consuming the chili and watching Big Hero 6.

What are your plans this week? Are you preparing for Lent?

Let me know since I'm going to need a little help getting around to all that preparing.

This Girl. She's my Groundhog Day or my Feast of the Presentation baby.

Whichever I call her, she's one of my most favorite surprises.

And she knows it. 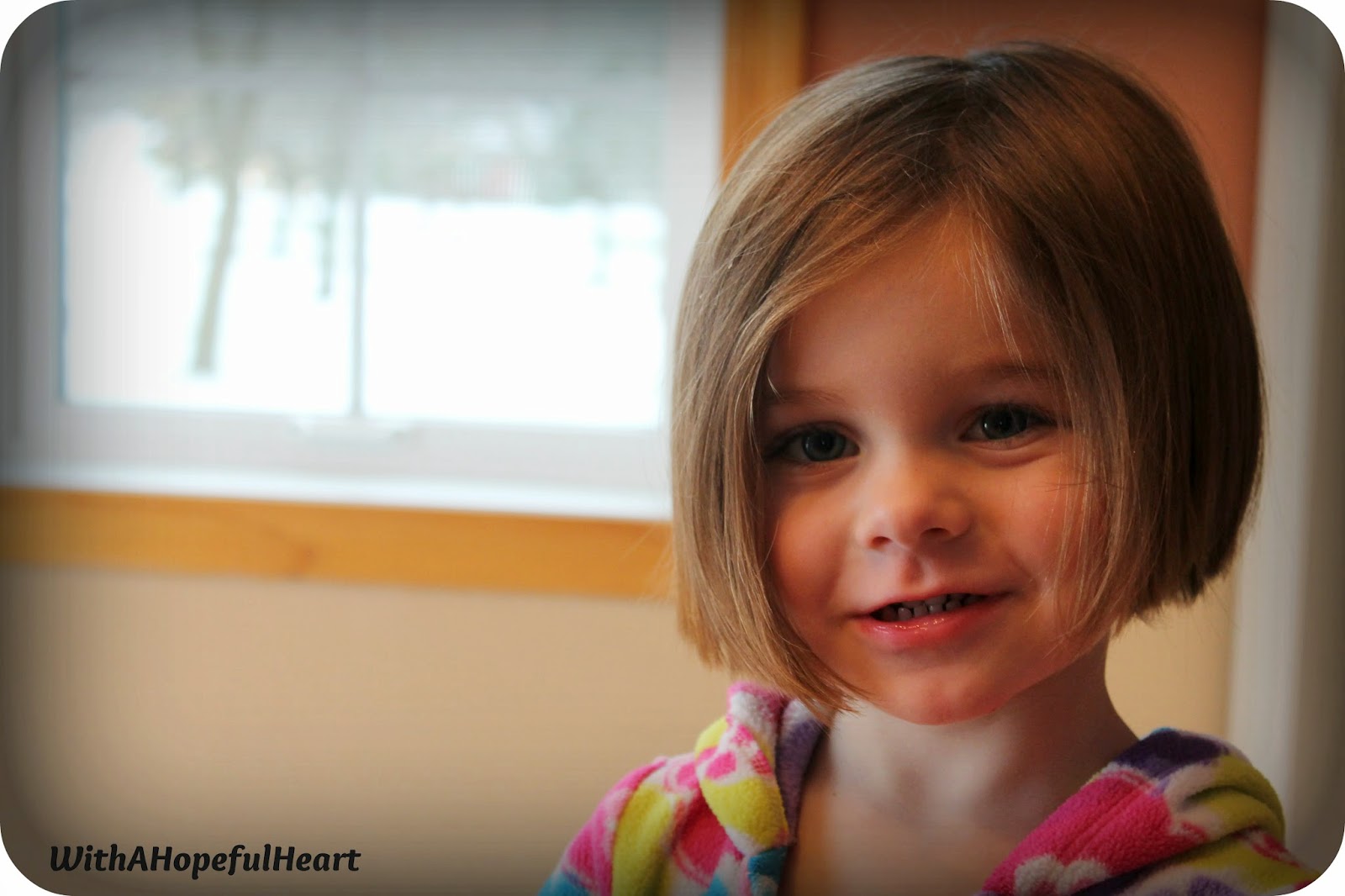 This Girl. Is one of the sweetest, most hilarious little girls.

Except when she isn't. And she gets a little grumpy. 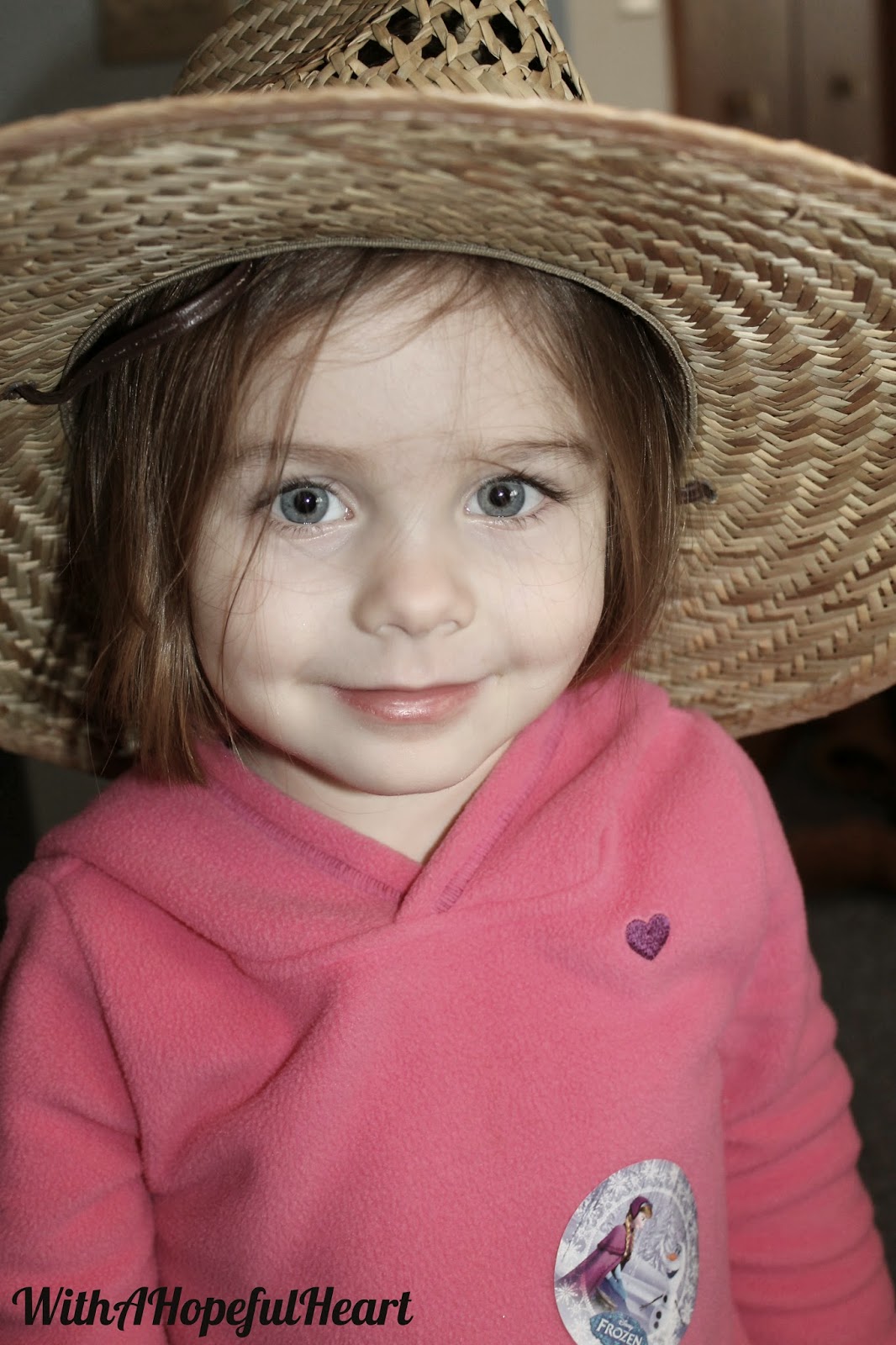 This Girl. Will melt your heart with that girly voice, those eyelashes and her big hugs.

Except when she shrieks at the top of her lungs, makes your heart jump out of your chest and scares you half to death. Every day. 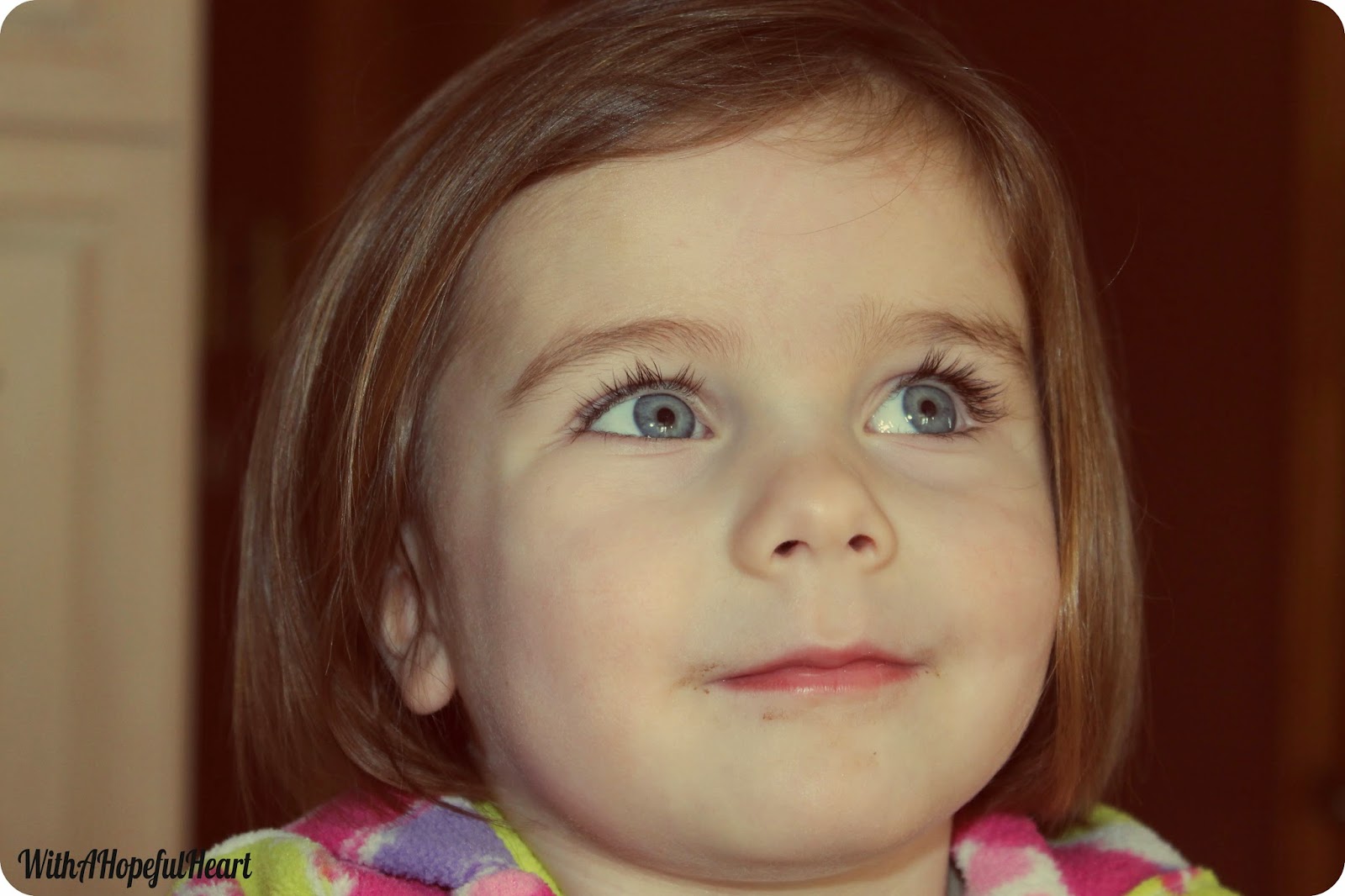 This Girl. She's crazy and silly, but can she can also be sensitive.

She likes to tag along with her siblings, tries to be included in most everything we're doing and doesn't like to be left out. 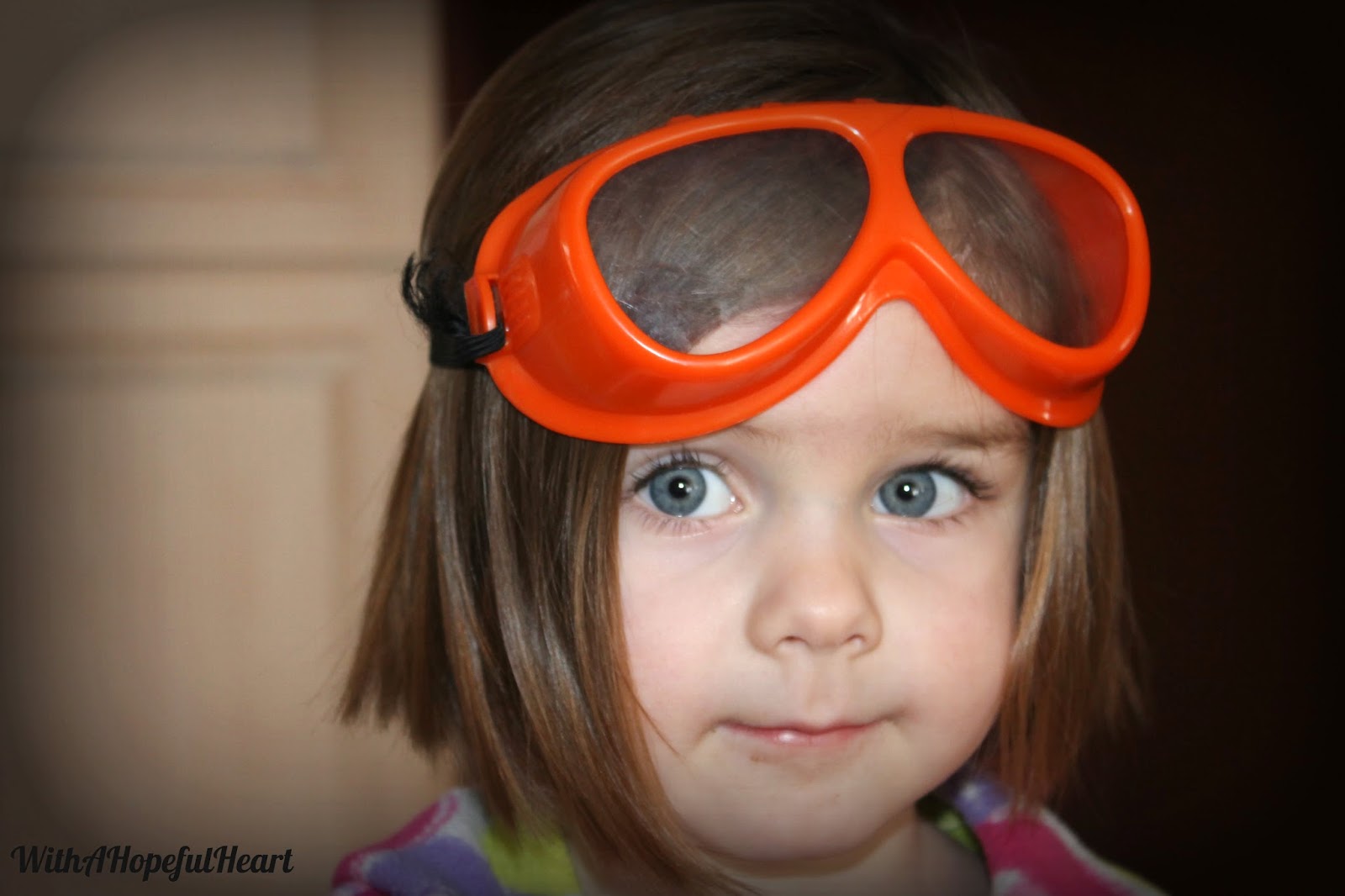 This Girl. Loves Olaf and in a way her sweetness and fun nature kind of make her our own little Olaf.

And so she'll get cupcakes with Olaf on them today to celebrate. 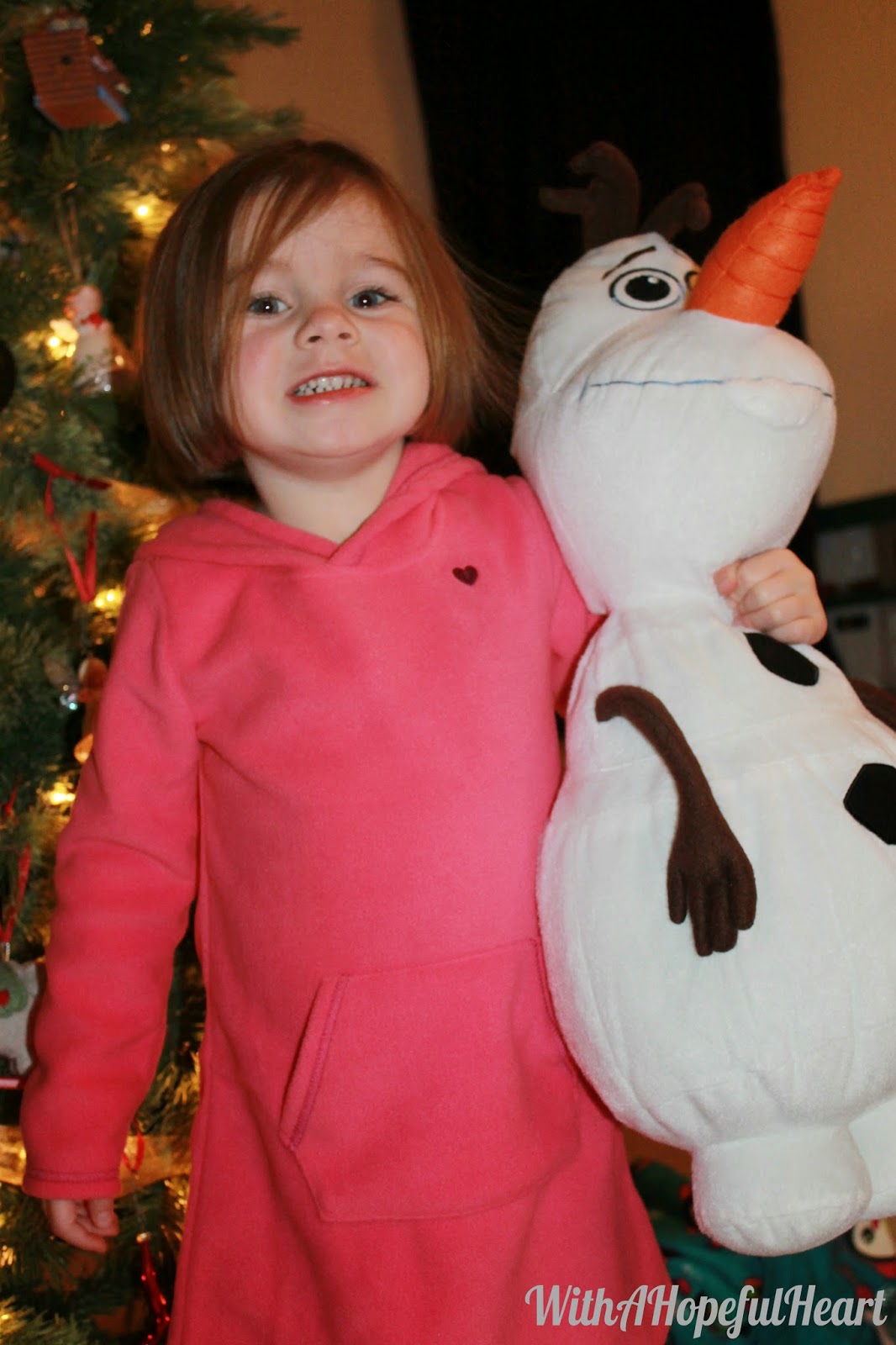 This Girl. Had me at Hello, just like all the others.

Three years in and she certainly remains my gem. 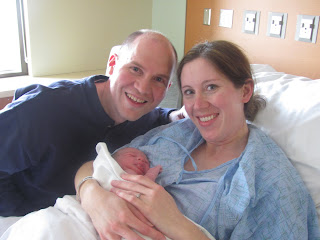 Happy Birthday to my Margaret Anne!

For two weeks I'll be the mom of "twins" once again with two three year olds in my household.
It's kind of fun to say that each year. It makes me chuckle at what mighty plans God has that He delivers in the form of a baby, even when you least expect them. 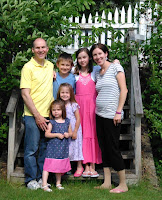 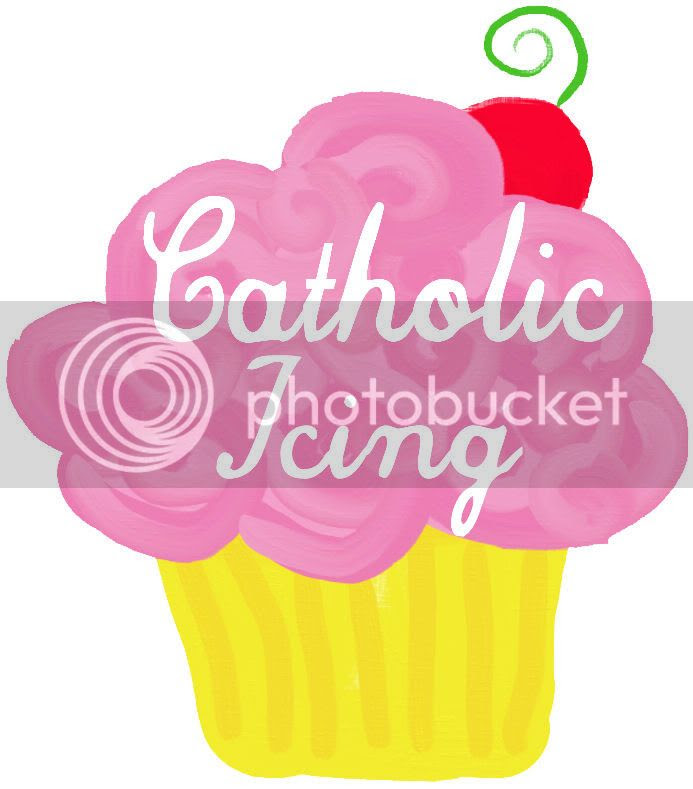